The best children’s party
entertainers in the business! 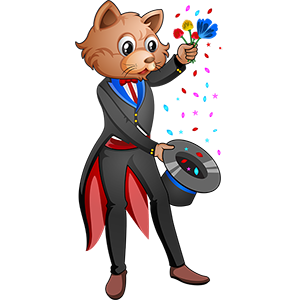 After warming up via a few moves to the giant, interactive TV screen the Mega Magic Show begins. With tricks specially developed for this age group, children’s magic  is taken to the next level and includes plenty of interaction and participation, incorporating the giant screen and the now world-famous ‘Pie Face’! This is, of course, topped off with the appearance of a live, magic rabbit.

After a break for food it’s time for the Mega Disco. With games, quizzes, Karaoke and dances, all interacting with the giant TV screen, and lights, bubble and snow machines to top things off, the party will come to a blistering finish!